The burden on today's job seeker: Create a resume that appeals to both human and machine.

Recruiting software and resume-scanning tools have created a new audience and shifted the way we define a well-constructed resume.

From November 8 through December 5, 2018, TopResume commissioned a study of recruiters and job seekers to understand the way a professionally written resume impacts the hiring process.

The results were definitive: An investment in a professionally written resume gives job seekers a competitive edge over those whose resumes were self-written.

In fact, recruiters perceived candidates with professionally written resumes to be worth 7% more than those without them. They also perceived these candidates as more polished and better able to deliver results, and they felt more confident about the prospect of presenting these candidates to clients.

Of the candidates who received TopResume's free resume critique, those who purchased a professional rewrite reported finding a job at a 32% higher rate than those who did not. Of those candidates, 68% secured that job within three months of having their resume professionally written and 42% of them moved on to a higher-level position.

Setting up the study

Under the direction of zhaus, a Brooklyn-based consulting firm that champions a data-centered and validated learning approach to product development, a two-part study was performed to answer two critical questions:

Part one: The recruiters

One hundred and fifty-seven talent acquisition professionals (recruiters), all of whom possessed at least five years of experience and were familiar with New York City's talent market, were asked to review three candidate resumes, one at a time, and then answer the same four questions:

The three "candidates" were:

After reviewing each resume, respondents were asked to rate how “polished” they considered the candidate's resume to be based on a Likert scale of 1 through 5; 1 being “not polished” and 5 being “very polished.” Scores of 4 and 5 were considered high. 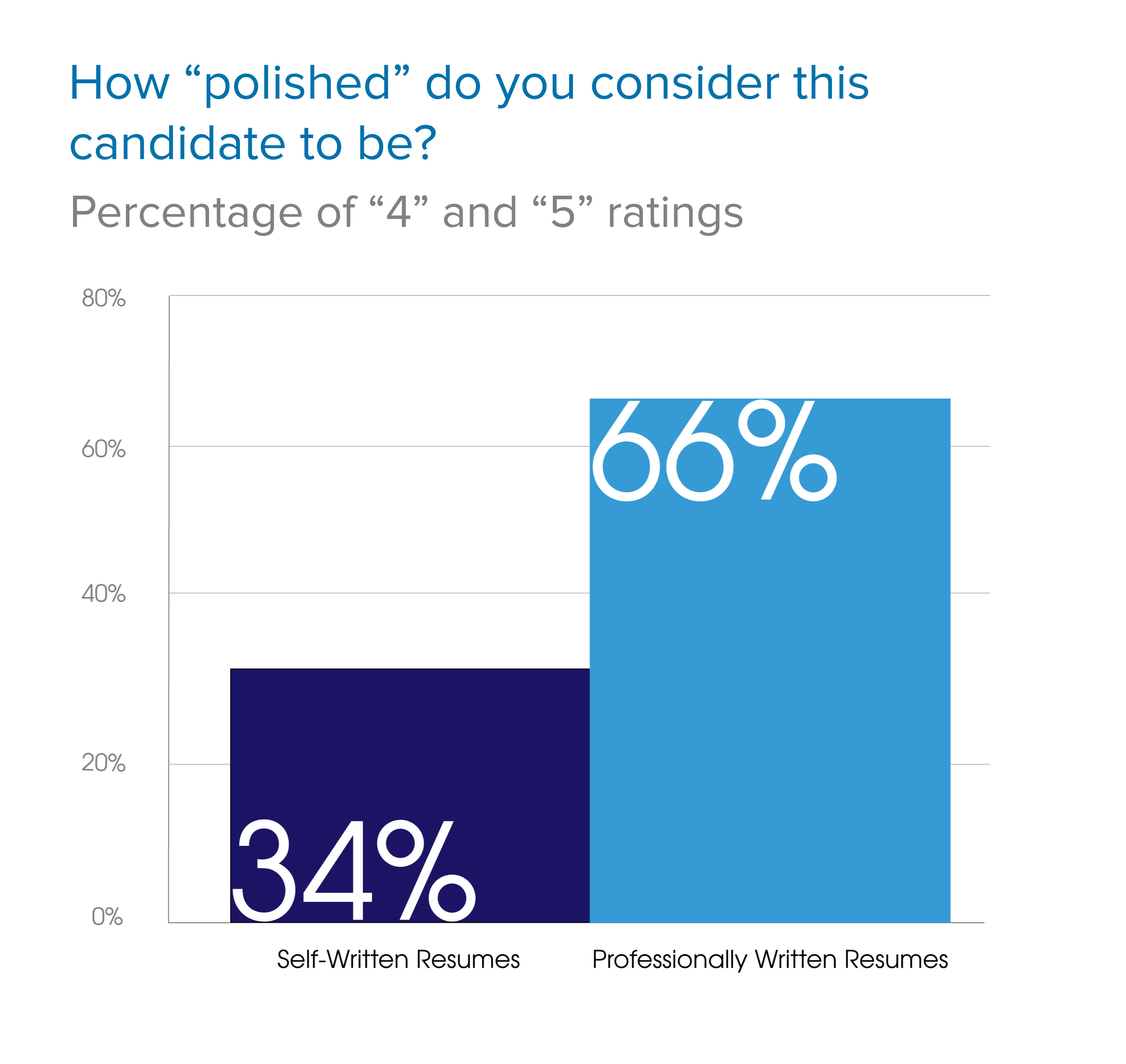 Finding: Recruiters were twice as likely to rate a professionally written resume as highly polished.

Recruiters rated the professionally written resumes with one of the top two marks (4 or 5) nearly twice as often as the self-written resumes: 66% vs. 34%.

A polished resume is clean, consistent, and easy to understand. It clearly articulates what you do, what you want to do, and, essentially, tells your story ... This is important because your resume is in a stack with many others. If it's not clear and easy to read, it's very easy [for recruiters] to just flip to the next person.

Respondents were asked to rate how well each resume demonstrates and/or quantifies the candidate's ability to deliver results based on a Likert scale of 1 through 5; 1 being “not well” and 5 being “very well.” Once again, scores of 4 and 5 were considered high. 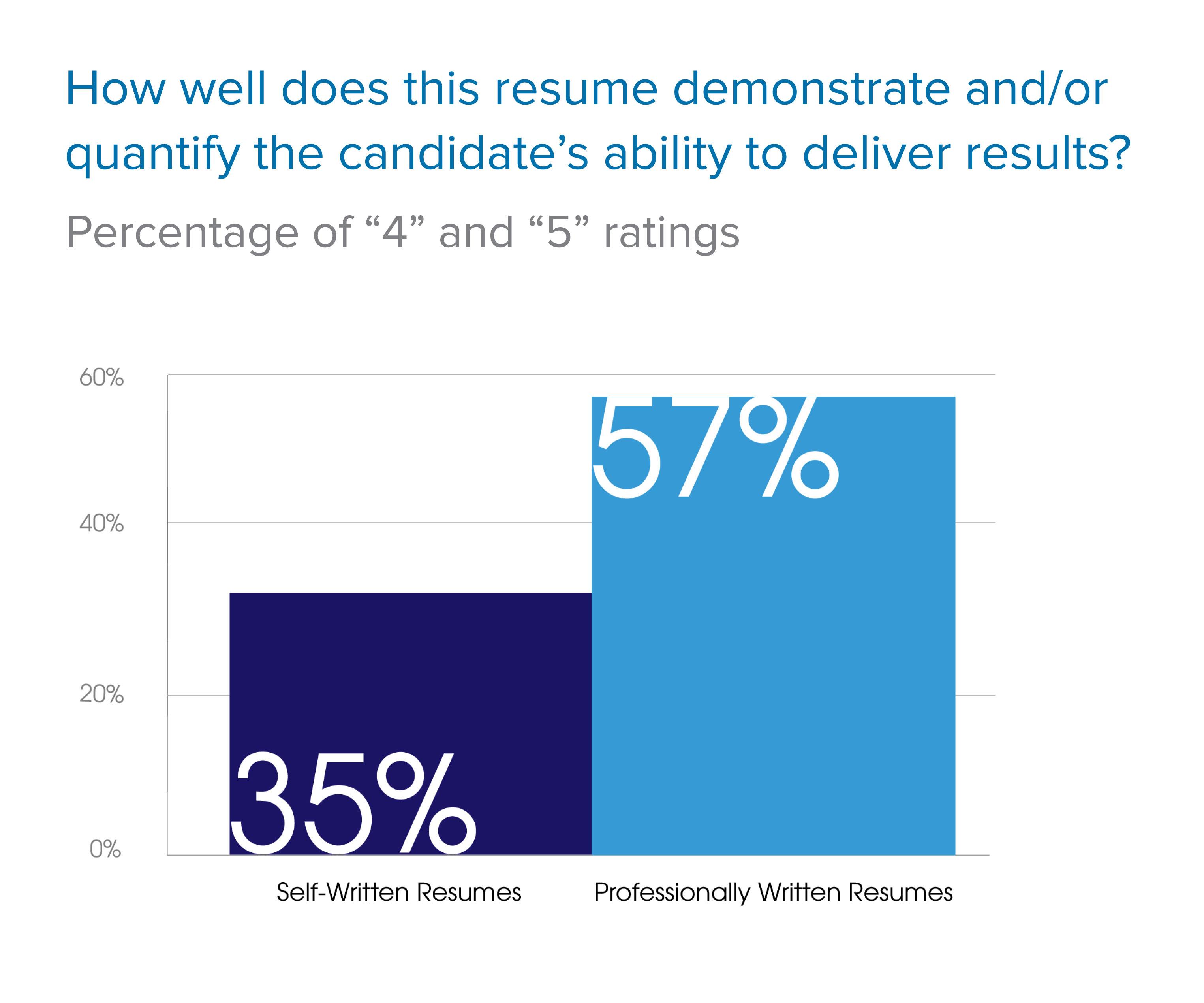 When presented with the professionally written resume versions, respondents rated them a 4 or 5 for how well they demonstrated the candidate's ability to deliver results 57% of the time, versus 35% for the original versions.

Finding: Candidates with professionally written resumes were more successful in demonstrating their ability to deliver results.

Recruiters want to see the results a candidate has achieved in his or her work history, as it speaks to that candidate's potential to succeed in the position they're trying to fill. The more effectively a job seeker quantifies his or her work and achievements, the easier it is for recruiters to grasp that person's value.

I'm always looking for resumes that are results-focused … the ones that seek to quantify and monetize their achievements are always the best.

In fact, when TopResume separately surveyed over 350 recruiters in February 2018 to determine the biggest resume “deal-breakers” that can cost a candidate the job, “failure to demonstrate and quantify results” came in at number five. When a resume fails to illustrate an individual's achievements and contributions, recruiters may assume the candidate held “responsibilities” but failed to take initiative or achieve actual results.

Respondents were asked to gauge what base salary each candidate would be expected to earn in the New York City job market:

What base salary (USD, in thousands) would you expect this candidate to be worth in New York City?

This question was followed by a self-qualifying question about the respondents' confidence in the salary estimate:

My level of confidence in a salary assessment is ... 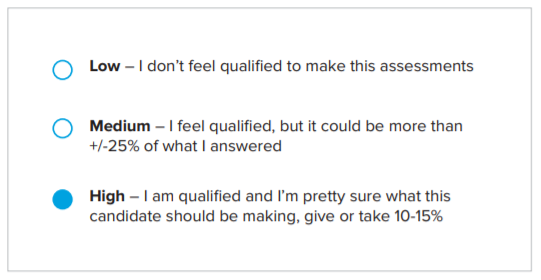 Answers with low confidence ratings were eliminated. For example, a recruiter might not have enough experience with the public relations field to be qualified to estimate the base salary for that candidate.After eliminating the low confidence responses, respondents who reviewed the professionally written resume version perceived the candidate to be worth 7% more than candidates presented by their original, self-written resume versions.

Finding: Recruiters perceived candidates with professionally written resumes to be worth 7% more than other candidates.

This means that candidates who use a professionally written resume are more likely to be offered more money for the job than if they used the original, self-written version of their resume — before the interview process begins.

Using the same rating scale, respondents were asked how confident they would feel presenting each candidate to a client or hiring manager. Again, those with professionally written resumes received higher marks (4 and 5) than job seekers with self-written resumes: 57% compared to 39%. 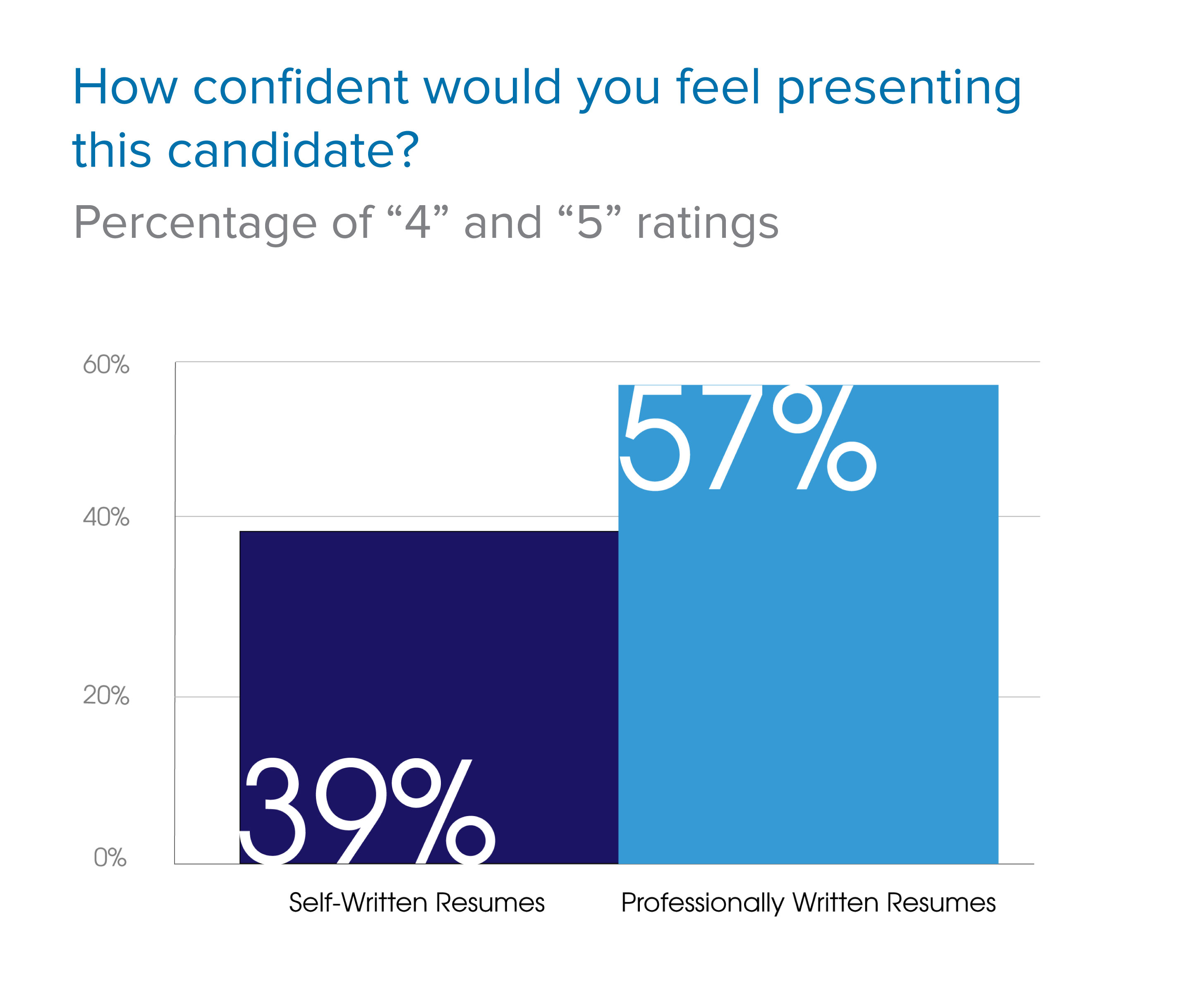 One hundred and thirty-two job seekers, all of whom had requested a free resume critique from TopResume in the six to 12 months prior to the study's launch date, were asked similar questions about their current job status and the results of their job search. Approximately two-thirds (89) of the respondents had hired TopResume for a professionally written resume; the remaining 43 had not.

All candidates were asked to describe their current job status: whether they secured a new job, were still looking, or had taken a break from job searching. A fourth option allowed respondents to write in an alternative job status. 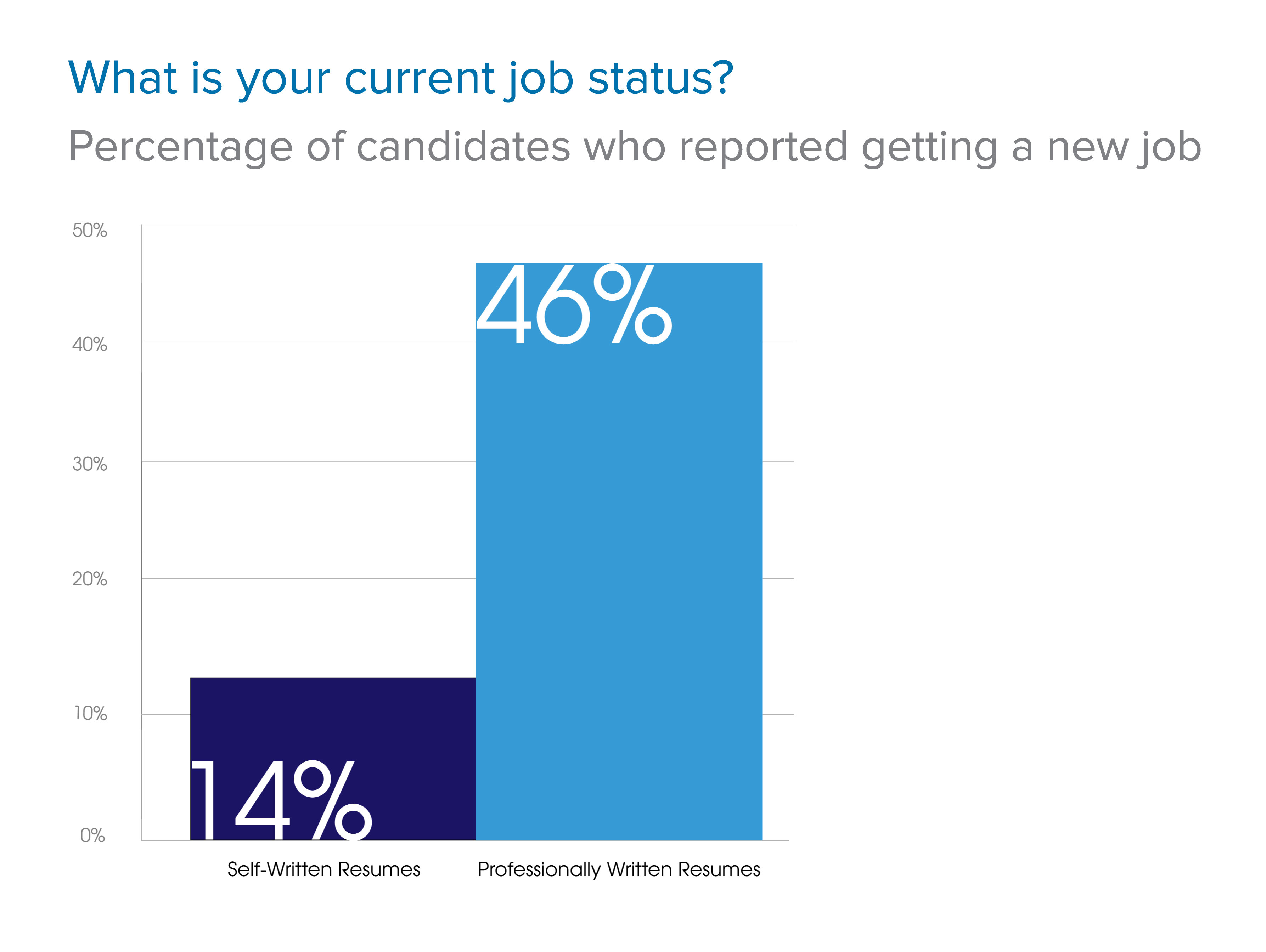 Finding: Candidates who had their resumes professionally rewritten by TopResume had a 32% higher rate of landing a new job.

Once I posted my new [professionally written] resume online, I received four phone interview invitations and two in-person interviews — and it has only been one week. Amazing!

For talent acquisition professionals and job seekers, the perceived differences between professionally written and self-written resumes have a significant impact in the real world, as well as a measurable and considerable ROI. 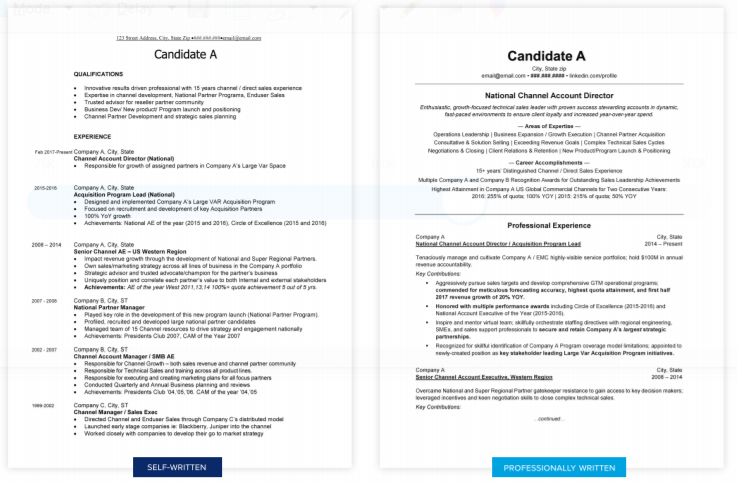 A successful resume should walk the reader through a candidate's experience, highlighting the skills learned and results achieved along the way. It should emphasize how those skills and results qualify the candidate for his/her next position.

A really strong resume tells the right story. It is relevant to the job and is able to create a narrative about why this person is qualified for the job.

Resumes should be formatted to be visually appealing, striking a balance between content and white space. However, elaborate formats, excessive color, and other design elements can have the opposite effect, making the resume look congested and uninviting.

The first draft of my new resume left me stunned … it showed me how much I had been selling myself short … this experience has been very empowering for me.

How to Write a Cover Letter (With Example)