NEW YORK (October 13, 2021) — TopResume, the world's largest resume-writing service, today revealed that the least experienced workers (five years or less) are the most optimistic they've been about the job market over the past six months. By contrast, the most experienced workers (20 years or more) have become less optimistic in recent months, despite starting on a similar trend as their younger counterparts.

Recently, TopResume unveiled its Job Seeker Sentiment Index, which uniquely measures changes in the way that job seekers feel about their career trajectory on a monthly basis — an industry-first. Over the past six months, TopResume has been polling its active U.S. job seekers in order to evaluate both their confidence about the job market and also their sense of overall job security. First calculated and benchmarked in April 2021, the TopResume Job Seeker Sentiment Index measures job seekers' opinions on current conditions, as well as future job market and workplace expectations.

“Between the vaccine rollout and The Great Resignation, the past six months have been an emotional roller coaster for job seekers at every level, but especially for those in the early stages of their careers, which makes their optimism so refreshing — even despite unemployment benefits winding down,” said Amanda Augustine, TopResume's career expert, who is also a certified professional career coach. “As an industry leader in career services, we developed the TopResume Job Seeker Sentiment Index to enable us to keep our finger on the pulse of the job seekers' journey amid so much uncertainty, so that we can optimally deliver on their evolving needs.”

To capture their confidence levels between this year versus last year, as well as their optimism for their future predictions, TopResume asked more than 10,000 U.S. job seekers the following questions:

“Perhaps unsurprisingly, job seekers with fewer years of experience are less jaded and, therefore, more hopeful than the older workforce because they don't have the historical memory of previous economic declines like the The Great Recession from over a decade ago,” speculated Augustine. “It will be interesting to see from the TopResume Job Seeker Sentiment Index if their youthful optimism sustains over the coming months — as well as the inverse for their more seasoned colleagues — especially as we head toward the most popular time of year to look for a new job.”

When asked about their overall job security, the younger workforce's overall confidence gain is directly related to their sentiment around current market conditions, which took a big leap in September 2021 from a score* of 127 to 138 — 15% above the overall U.S. population surveyed in September 2021 and 9% higher than their reported sentiment in the previous month. By contrast, the most experienced workers have reported lower morale in recent months, despite sharing a similar starting point (see chart below). 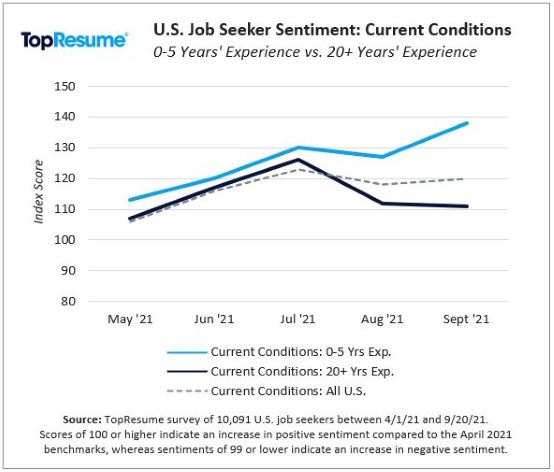 Methodology: Inspired by the same methodology used by the prestigious University of Michigan Consumer Sentiment Index (UMCSENT), the TopResume Job Seeker Sentiment Index survey was conducted online within the United States between April 1, 2021 and September 30, 2021, among 10,091 adults. *Scores of 100 or higher indicate an increase in positive sentiment compared to the April 2021 benchmarks, whereas sentiments of 99 or lower indicate an increase in negative sentiment compared to the benchmarks. The company's aim is to provide an accurate forecast of future job seeker confidence and job movement over time. Respondents were randomly selected from among TopResume's visitors, and the findings are at a 99% confidence level with margin of error +/-3%.

TopResume, a Talent Inc. company, is the world's premier resume-writing service, analyzing millions of resumes and LinkedIn profiles each year. Job seekers work directly with professional writers and industry experts to redefine their personal brand and stand out from the crowd during the job-search process. Follow TopResume on Facebook, LinkedIn, Twitter, and Instagram and visit TopResume to request a free confidential resume review.

7 Signs Your Resume is Making You Look Old